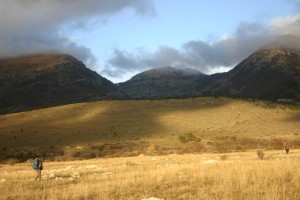 Let us introduce you with our “second home” area!

Velebit is the largest mountain in Croatia and is a part of a bigger mountain chain of Dinarides stretching form the Alps, across Croatia, Bosnia and Herzegovina and Montenegro to Albania. The area of Velebit Mountain comprises 2.359 square kilometres.

The mountain itself is scarce with water,  springs and surface watercourses are rare, especially in the northern and middle parts. Despite of that, inside the Velebit massif there are huge freshwater reserves.

In Velebit area about 90 different habitat types, according to the CORINE classification, can be distinguished, some 20 of them in Paklenica National park alone. That is about 70% of all habitat types found in Croatia.

Because of its multiple natural values, Velebit Mountain has been attracting the attention of both domestic and international scientists and experts, for a long time.

Because of the harsh climate, in the top parts of Velebit there had never been permanent settlements. However, people from the mountain villages on the coastal slopes, used to bring their cattle there for grazing in summer periods

Velebit mountain passes were very important communication and trading routes between the coast and the inland. The roads build for that purpose are the masterpieces of the building heritage and stone-carving skills. The part of this rich heritage are numerous wells and springs, water-mills, sacral objects, traditional trails and “mirila” – these are specially arranged stones along the Velebit traditional trails where people used to take some rest during the transport of their dead from the mountain towards its foothill. This is a specific cultural heritage in this area.